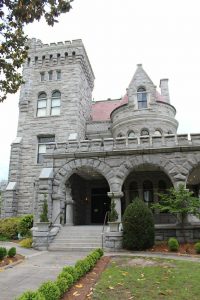 Atlanta, Georgia is a city caught between the traditionalism of its architecture and the progressiveness of its present. Once a hotbed of nationalism and prejudice during the antebellum South, Atlanta has since transformed into a modern city consisting of 60% predominately black neighborhoods. The city played an important role in both the Civil War and the Civil Rights Movement of the 1960s, and houses the Atlanta History Center and Martin Luther King Jr. National Historic Site as testaments to this legacy.

The infamously haunted Rhodes Hall prevails as a testament to a different kind of legacy. Built in 1904 by staunch supporters of the South, Rhodes Hall is a stunning architectural marvel that serves as a reminder of the city’s dark past. The house itself has remained largely untouched by time, and every piece of furniture and decor remains intact, including some less than tasteful artwork. Scariest of all, the original owners are rumored to lurk behind in the castle-like mansion where they spent their final days.

When designing the blueprints for where he and his wife were to spend eternity, millionaire furniture tycoon Amos Giles Rhodes spared no expense. Rhodes ordered his new abode to be carved with granite harvested from the ominously named Stone Mountain in an equally ominous Romanesque Revival style. To top it off, Rhodes also outfitted the home with some 300 light bulbs, giving it the appearance of a  glittering fortress made of stars. The home is formidable, with sweeping stone archways, immaculate landscaping, a windowed turret that looks as though it was plucked straight from the middle ages.

Amos and his wife Amanda moved into the estate in 1904 and quickly began filling it with rare and expensive furniture. The interior is lavishly decorated, featuring ornately carved, throne-like chairs, golden chandeliers, massive four-poster beds, and a fleet of stone angels keeping watch. Creepiest of all, the Rhodes installed a sprawling stained-glass mural depicting the rise of the Confederacy. The mural stretches across three panels and features a portrait of Nathan Bedford Forest, former Grand Wizard of the KKK. Amos and Amanda were beyond thrilled with their new home, and referred to it only as “the dream.”

In 1927, Amanda passed away inside the house and was shortly joined by her husband in 1928. Following their parents’ passing, the Rhodes children deeded the home to the State of Georgia. From 1984 to 1992, a haunted house attraction held inside the mansion drew in thousands of visitors. Little did they know, their experiences may very well have been real.

Looking at it today, the massive Peachtree Street estate looks startlingly out of place, backed by high-rise office buildings and the blur of hundreds of cars speeding past. But thanks to the Georgia Trust, a historic association dedicating to preserving the state’s architectural history, Rhodes Hall isn’t going anywhere. Now a preserved historic site, the mansion houses guided tours and holds weddings and other events inside its stone walls. And according to some, the cranky old spirits of the original owners.

More: History of a Georgia castle

Amos and his wife were apparently so enamored with their towering, fortress-like home they decided there was no real reason to leave. Rumor has it that the spirits of the old couple still lurk through the creaky old corridors of Rhodes Hall to this day. Over the years, hundreds of visitors, wedding parties, and tour guides have entered through the massive front doors of the hall, and quite a few of them have run screaming out the way they came. Although undoubtedly a beautiful historical landmark and definitely worth stopping by, Rhodes Hall is not for the faint of heart.

In life, Amos and the missus mostly kept to themselves, growing old inside their glittering shrine to the South as the world slowly passed them by. One thing was for sure, the couple liked to be left alone. If this was true in life, it seems to ring even truer in death, as the Rhodes evidently do not appreciate visitors. Across the board, most guests and tour guides of Rhodes Hall report feeling an overwhelmingly hostile presence permeating the air as soon as they enter, as if whoever lurks there wants them out, and fast.

One tour guide, who worked at Rhodes Hall only briefly before quitting, reports an especially terrifying tale. The guide was at the Hall late one night, having just finished up an evening “behind the scenes” tour. She was tired from a long day of work and wanted nothing more than to go home and see her cat, Mitsy. But Mitsy would have to wait. The guide had just finished gathering up her belongings and was about to descend the back staircase when she heard someone creeping up the stairs toward her.

She froze, her heart catching in her throat; no one else was supposed to be in this part of the building but her, and she had just watched the last of her co-workers leave. The footsteps were slow and heavy, and a third noise punctuated each step, like the tapping of cane. As the footsteps grew closer, a deep male voice began to growl: “get out…get out…” The guide hoped and prayed it was just her co-workers playing a cruel joke on her. She called out to them, but there was no answer.

Suddenly the ghastly shadow of an old, bent man appeared along the dimly lit wall, his wild hair sticking up in all directions, his cane stretched out in front of him. The deep male voice grew louder and louder until it was practically screaming, “GET OUT, GET OUT!” Not wanting to stick around another second, the tour guide turned and fled down the main staircase and out the front door, not even bothering to lock up behind herself. She quit the next day over the phone and never returned.

Another unlucky soul reports an equally eerie run-in with Amos’s wife, Amanda. A young woman was enjoying a pleasant visit to Atlanta with her family when her paranormal-obsessed sister suggested they take a tour of the notoriously haunted Amos Hall. It took some convincing, as the woman was terrified of all things spooky, but she eventually gave in to her sister’s demands. The family bought tickets for an all-inclusive tour and set off the next morning to see the infamous Amos Hall.

The minute the young woman entered, she felt a chill creep up her spine. She reports feeling the unsettling sensation that she was not welcome, and even more disturbing, that she was being watched. Grabbing for her sister’s hand, she tried to explain to her that she was having second thoughts about the tour. Her stubborn sister simply squeezed her hand harder and pulled her along. The family followed the tour guide through the lavishly decorated halls, stopping to admire the paintings and antique furniture. But the young woman was too nervous to appreciate any of it. She paused for a moment to study a portrait of old Mrs. Rhodes. The woman in the picture was bent and gray, with steely hair and unsmiling eyes. Looking at her sent a shiver up the young woman’s spine. By the time the woman had turned away from the portrait, her family and the rest of the tour were gone; she was all alone with Mrs. Rhodes.

Terrified, the woman turned to rush out of the room, but a strange sound stopped her in her tracks. Every piece of furniture in the room began to rattle and shake, and the lights overhead flickered on and off. All the hairs on the back of the woman’s neck stood straight up. Suddenly, the frail face of old Mrs. Rhodes appeared in an antique mirror, her ghostly figure superimposed over the woman’s own image. The young woman shrieked and ran from the room just as portraits and paintings began to fly off the walls. Luckily, her family was not charged with any damages.

Over the years, the Hall’s haunted reputation has attracted plenty of attention and has even been featured on investigative paranormal shows such as Ghost Hunters. The ghost hunters as well as other paranormal experts have recorded inexplicable EVPs, or electronic voice phenomena, children’s laughter, lights turning off and on by themselves, and doors slamming and locking. But based on what we know about them, perhaps it would be best to simply leave the Rhodes alone.

From its role in the Civil War to the Civil Rights Movement of the 1960s, Atlanta is steeped in history. The architecture is as rife with Southern charm as it is with stories of the past, many of ...
Read More
Loading....