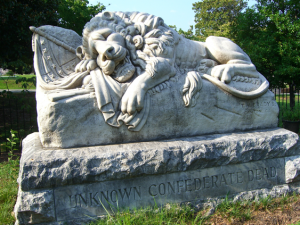 Framed by fragrant magnolia trees and towering oaks, the classic Victorian-style architecture of Oakland Cemetery looks like something plucked straight from a 1950s horror flick. Standing among the moss-covered gravestones and mausoleums the size of small churches, it’s easy to imagine the pallid figure of a vampire or zombie lurking among them. And while visitors have yet to report sightings of either creature, Oakland Cemetery has no shortage of the unexplained. With a history dating back to pre-Civil War Atlanta, the cemetery is deeply entangled in the city’s past as well as its present, and houses ghosts from every era in between.

Chartered in 1850 and stretching across nearly fifty acres of land, Oakland remains the largest and oldest cemetery in the city. But before it was Oakland, the cemetery was known as Atlanta Cemetery and covered a mere six acres of land. The original acres were located just outside the city limits and were virtually barren compared to the lush, abundant greenery of today.

The first Atlanta resident to be buried at the cemetery was a doctor by the name of James Nissen. According to legend, Dr. Nissen harbored a crippling fear of being buried alive. To alleviate his fears, the anxious doctor requested that his jugular vein be severed prior to his burial. His request was obliged, ensuring Nissen would never wake up on the wrong side of the grave.

The city of Atlanta expanded exponentially in the following years, eventually surrounding the cemetery that once sat on its fringes. As the city grew, Oakland grew with it, adding new acres each year and filling them with graves and crypts for prominent Atlanta families. By 1872, the cemetery donned its current name in honor of the oak and magnolia trees planted in the area. By 1896, the city added the imposing wrought iron gates and perimeter walls enclosing the cemetery.

Following Atlanta’s significant involvement in the Civil War, city associations began sectioning off cemetery plots in tribute to fallen Confederate soldiers. The first and most recognizable of these comes in the form of a massive stone lion dubbed “the lion of the confederacy.” The great stone beast lies positioned atop a stone slab, its eyes closed and its posture relaxed as if in a deep sleep. Wrapped in the lion’s paws and under its head can be seen the carved figure of a confederate flag. The sleeping lion, who uses the flag almost as a pillow, dreamily watches over a field of over 3,000 unknown Confederate dead. Of these 3,000 graves, 16 of them mark the final resting place of Union soldiers, who lie sleeping among their fallen enemies for all eternity.

Along with the Lion of the Confederacy, Oakland houses a second Civil War monument known as the Confederate Obelisk. During the war, Atlanta became a major medical and transportation center for the Confederacy and housed several of its largest military hospitals. Hundreds of wounded soldiers died in these hospitals and became permeant guests of Oakland. The soldiers were soon joined at Oakland’s Confederate section by fallen men initially buried in shallow battleground graves.

The obelisk marking their final resting was carved from granite harvested from Georgia’s Stone Moutain and at 65 feet tall, was once the tallest structure in the city. The city dedicated the imposing gravemarker on April 26th, 1874, on the anniversary of Joseph Johnston’s surrender to Union general William Sherman. To the north of the obelisk lie the bodies of four Confederate generals: John B. Gordon, Lucius J. Gartrell, Clement A. Evans, and William Wright. Other significant burials at Oakland include Gone with the Wind author Margaret Mitchell and 27 former Atlanta mayors.

History of a cemetery: Civil War soldiers, captains of industry, and paupers all interred on historic grounds.

Oakland Cemetery further embodies the darker elements of our country’s complicated past in its Black section. Built at the height of American segregation, the section is a testament to prevailing sentiments of prejudice that lingered long after the South’s surrender. The most notable feature of this section is the lack of headstones and grave markers. Because of the unattainable cost of such items, families could usually only afford graves made of wood and other biodegradable materials, which eventually broke down and deteriorated over time. In recent years, the city of Atlanta has made significant strides to rectify the errors of its past, most notably with the burial of Maynard Jackson, Atlanta’s first black mayor, in the original historic six acres of land. Other significant burials in this section include Antoine Graves, principal of the first Black school in Atlanta, and Reverend Frank Quarles, an early benefactor of the historically black Morehouse College.

The city of Atlanta is no stranger to contention, and many paranormal experts believe that in Oakland, the battle between North and South rages on even in death. Experts also believe that the cemetery’s unpopular practice of burying unnamed Union and Confederate soldiers in the same field only serves to heighten these tensions. This is exemplified in the story of one visitor in particular.

According to his report, the man entered the historic cemetery just before nightfall on a chilly evening in November. The man was from up North and had ancestors who fought and died in the Civil War. While in Atlanta on business, the man decided to get out and do a bit of sightseeing after a long day of meetings, and maybe even stop by the grave where his ancestors were most likely buried.

The instant the man passed through the cemetery’s massive iron gates, he felt a chill creep up his spine. As he walked down the winding pathways full of imposing gothic mausoleums and time-worn headstones, his initial feelings of discomfort only worsened. After a while, he found himself in the Confederate section of the cemetery, surrounded by unmarked graves. The uneasy feeling in the pit of his stomach grew stronger still when he noticed the thick fog that had rolled in around the headstones, seemingly out of nowhere. The man looked around and noticed that there was not a single living person in sight; he was all alone.

Just then, he heard a strange creaking sound. He looked up to see the pale, ghostly figure of a Union soilder hanging by a rope from the branches of a tall oak tree. The soldier’s head was turned downward, with his hat covering most of his face. In the distance, the man could hear what sounded like a troop of soldiers shouting, and the drums of war thumping out an ominous rhythm. Just before he turned tail and ran, the man caught a glimpse of the name stitched into the soldier’s uniform: his own.

A second visitor to the haunted Oakland Cemetery reports a similarly spine-tingling story, only from the Confederate descendent perspective. The young man had lived in Atlanta all his life, and although he was aware his ancestors were buried in Oakland, had never made the trip to see them. When he turned 18, his father decided it was time to change this.

On the day of his 18th birthday, the two made the drive up to Oakland. On the way, the young man’s father made a joke about his son finally being old enough to join the army. The boy laughed it off, unaware of just how true his father’s words were about to ring.

The pair reached the cemetery and traveled down the path to the Confederate section. Almost as soon as they reached their destination, the boy’s father had to take a phone call, leaving him all alone among the tombstones. Almost at once, the boy began to feel uneasy. He stood around with his hands in his pockets, waiting for his father’s return. After several minutes, he gave up waiting and began wandering aimlessly among the graves.

It wasn’t long before he could feel the wind begin to pick up, and a strange, unseasonable chill permeate the air. From out of the ether, the young man suddenly heard a loud, booming voice begin to call out a list of names. After each name, another voice responded, “Here!” The voices appeared to come out of everywhere and nowhere all at once, yet seemed completely divorced from their bodies. The boy looked wildly all around him but could not identify the source of the sound.

Panicked, he began to run through the cemetery, yet the voices followed him wherever he went. As he ran, he passed by the lion marking the graves of the unknown soldiers, and swears the stone beast opened its massive jaws and yawned at him. Just before he reached the gates, the booming voice of the commanding officer called out one final name: the young man’s own! Terrified, he rushed out of the cemetery bounds, nearly tripping and falling on his way out.

The young man’s father stood waiting for him on the other side. Practically in hysterics, he relayed his frightening tale, and when he had finished, his old man burst into laughter. The boy stared in shock at his father, who explained through fits of laughter that on his 18th birthday, his father had played the same trick on him. If the boy was still bent up about it by the time he had a son of his own, then he could return the favor by taking him to pay a visit to the old Atlanta Cemetery.

So whether you come from the North or the South, Union or Confederate, Oakland Cemetery is without a doubt the most haunted destination in all of Atlanta, and an absolute must-see for any paranormal enthusiast.

From its role in the Civil War to the Civil Rights Movement of the 1960s, Atlanta is steeped in history. The architecture is as rife with Southern charm as it is with stories of the past, many of ...
Read More
Loading....